Picture this, a family huddled around the radio on Halloween, the sun is going down and a spooky story unfolds, everybody listens intently, imagination is working overtime, a bell chimes, there is a scream….

Before television, radio was the entertainment of choice in homes across Australia. During the 20th century,  radio broadcasts varied greatly, with something for everyone including music shows, talks on politics, gardening and various topics, sporting event coverage, news, and of course serial dramas!

One of the most popular genres broadcast was serial thrillers! Not too dissimilar to many of the thriller podcasts that are popular today. Instead of reading a book one could go about what they were doing while being entertained by this gripping episode broadcast across the airwaves.

Having gained huge popularity in the USA, many thriller scripts were sent over to Australia and adapted locally, featuring well known Australian actors of the time like Ruth Cracknell

On “All Hallows Eve” 1941 A witch’s Tale was broadcast to Australian audiences.

A witches Tale was written especially as a Halloween broadcast and adapted for Australian radio.

The original American series of The Witch’s Tale was significant as the earliest horror program produced for radio. It was first heard in May 1931 out of radio station WOR in New York City. 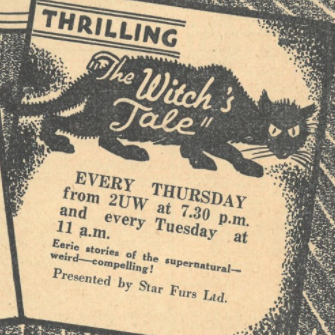 The opening sets the tone of the episode, with the chiming of a bell, an eerie voice informing you that you will hear tales from Nancy the witch of Salem and her cat Satan accompanied by sinister music and sound effects.

The Brisbane Telegraph described the program in 1947 as ‘not the sort of radio program the timid would enjoy listening to when alone in the house after nightfall.

In fact, Newspapers began to receive letters from outraged listeners protesting the broadcasts of such horror and the damaging effect it had on young people.

‘Do parents realise the serious damage that may be done to the minds of their children by the horror story of the radio? One serial broadcast from a local station between 6 and 7pm for children could cause untold mischief to many an innocent child … This mental cruelty is worse than punching a child in the face’ – CT Turnbull, Assistant Secretary of the Newcastle Young Men’s Christian Association, Newcastle Morning Herald, 6 June 1941.

Since we are so close to Halloween, want to hear that very tale from 1941 yourself? You are in luck!!

The National Film and Sound Archive of Australia have provided some Samples of these thriller podcasts/ Click here to listen to A Witches Tale broadcast in 1941 (program duration 26 minutes).

Information courtesy of the NFSA.