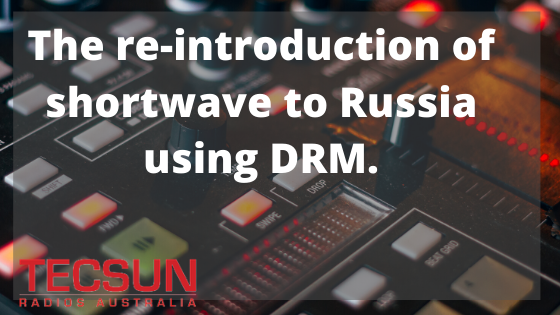 Russia is considering the re-introduction of shortwave radio using DRM (Digital Radio Mondiale), a technology which is designed to cover large areas at modest operating cost.

Prior to the 2000’s, shortwave was broadcast in Chukotka for communications across the far northeastern region of Russia and the Northern Sea but was gradually discontinued as funding became more difficult to obtain.

Transmitting shortwave digitally offers the advantage of long-distance coverage and a higher fidelity signal. Text information such as news and weather can also be embedded in the signal and decoded at the receiver. Recent studies show that DRM is just as reliable as analog shortwave over this distance via single-hop transmission. An added benefit of DRM transmissions is they use a quarter of the power that analog transmissions.

The target audience includes people in the Northern Sea including mariners, miners, geologists, hunters, and nomadic reindeer herders. All of these groups would benefit from both news and weather as well as traditional entertainment programming.

A range of test transmissions commenced in August 2019 via different DRM modes and bandwidths to trial “hardware setup and determine signal acceptability,” with the goal of covering over 95% of the area. Programming consists of a music loop and interestingly has been heard as far away as the United States.

Radio Purga’s regular programming is expected to begin sometime in the next few months. One of shortwave’s finest capabilities is to communicate to hard-to-reach locations. Radio Purga’s audience is spread over a remote and vastly spread region.

Resuming shortwave via DRM will provide the population with a critical communication source in both audio and text.

The Art of Frequency Planning and Why Shortwave Frequencies Change With The... Video may have killed the radio star but shortwave is having a resurgence!!...
Scroll to top