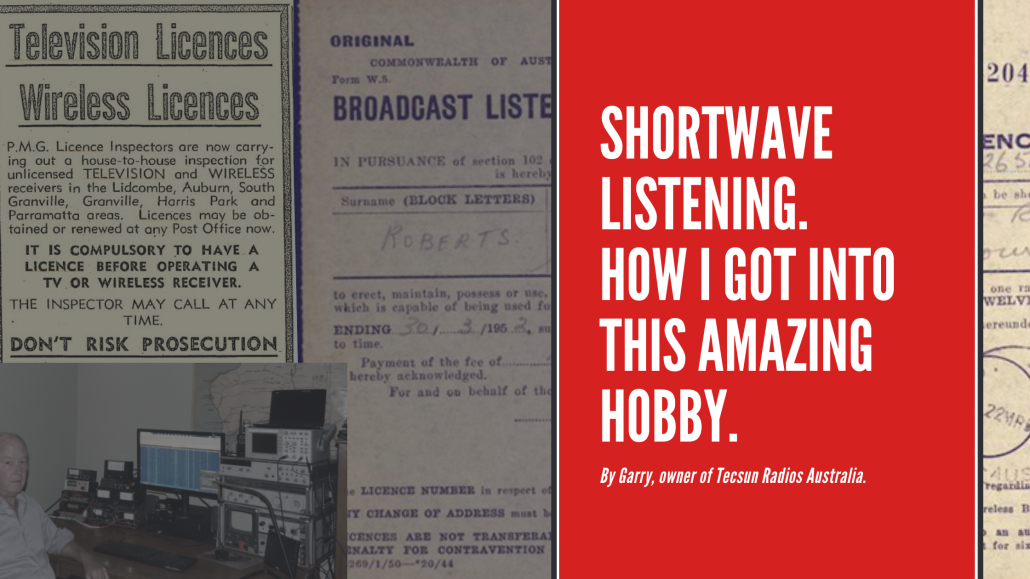 Many technically inclined people have discovered shortwave listening in their youth. Years later they continue to the fascinated by what can be heard on the shortwave bands.

This is my story….

As a teenager, I became interested in radio by reading the hobbyist magazines of the day. There were tantalising ads for army disposals stores in Sydney full of communications equipment but beyond my modest means.  In my case, I acquired several old valve radios thrown out at the local tip. Much to the disgust of my parents, I regularly carried such prizes home and commenced my new hobby of listening to the radio bands.

In those days most home entertainment units were made of wood and contained a radio receiver that covered the broadcast and shortwave bands.  I was lucky to find one that worked. Quickly discarding the bulky wooden cabinet, the receiver became a benchtop unit, exposed in all its glory. The speaker used an electromagnet (no permanent magnets in those days) and the signal strength meter was a green valve indicator poking through the front panel called a “magic eye”.

The next step was to install an antenna which comprised the longest piece of wire I could find. I recall that unraveling the enamel copper wire from a transformer became the most cost-effective solution.

Soon I was listening to overseas stations, many broadcasting in English, and occasionally I heard important events. I recall clearly listening to the Victoria Police on one of their HF frequencies when they announced the search for a prominent politician who had gone missing in December 1967.

I informed my parents of this important event and they were amazed to discover a few days later that I had been listening to the search for the then Australian Prime Minister, Harold Holt who disappeared in the surf at Portsea in Victoria.

I enjoyed listening to distant MW stations all over Australia, and collected quite a few QSL cards from broadcasters around the world.

Believe it or not, a Broadcast Listeners Licence was required in Australia until in 1974, at a cost of $26.50, so there was a degree of secrecy involved in all this listening activity.

Eventually, my shortwave listening led me to an interest in Amateur Radio. I knew a local lad who was fortunate enough to purchase the entire correspondence course for the amateur exam and who loaned it to me after he obtained his license.

So in August 1973, I obtained my amateur radio license. Somehow I managed to make the required 90% pass mark, much to my amazement.

My first amateur radio transceiver was a converted Pye reporter VHF AM taxi radio. I recall it had a huge valve in the output stage, requiring several hundred volts from the power supply to operate. The only semiconductors were in the 12 volt inverter powering the entire contraption. When the push to talk button on the microphone was pushed, it took a few seconds for the voltage to build up sufficiently to allow the transmitter to operate!

From that point, there seemed to be an endless succession of different two way radios being fiddled with to obtain the best on air performance. During subsequent years I became interested in amateur television and satellite communications.

I recall in about 1975 being able to eavesdrop on the US operators of the Applications Technology Satellite 1 (ATS-1), the world’s first weather satellite. At the time my interest was driven by the fact that antennas for the VHF and UHF bands where physically manageable and easy to make.

However, my interest in VHF and UHF waned as mobile phones replaced the two way radio as the preferred method of communication and I became re-energised with shortwave.

In much the same way as my earlier experience with VHF and UHF was driven by the availability of ex-commercial equipment, so was my entry into HF communications.

Second hand commercial transceivers designed for use by the Royal Flying Doctor Service became available and soon I was running 100 watts on the HF amateur bands, communicating with people around the world.

Someone once told me that shortwave listening is like fishing… you never know what you are going to get. That certainly described my experiences.

One incident worthy of mention was receiving the USAF Strategic Bomber Command broadcasts. These coded transmissions were part of the US military control of nuclear weapons and could control the launch of ground-based missiles should war be declared! These broadcasts weren’t public knowledge at the time.

I also heard the US military MIA recovery missions into Laos and Cambodia at the end of the Vietnam war, fascinating listening. Over the years I have heard several successful search and rescue missions involving aircraft being ferried from the USA to Australia. On one occasion I heard a commercial cargo jet traveling from Australia to the US, circling a downed pilot until the US Coastguard could reach him.

To be able to listen to these situations unfolding in real time is one of the aspects of shortwave listening that makes it an exciting hobby, contrary to common belief.

These days I mostly listen on HF. There is an amazing range of broadcasts available to shortwave listeners, ranging from utility stations like the Bureau of Meteorology, 4WD networks, HF aircraft networks and VOLMET, and secret numbers stations, as well as regular, scheduled shortwave broadcasts from all over the world.

Now, listening is even easier, as broadcasting schedules are freely available, and the worldwide network of internet accessible KiwiSDRs provide a fantastic resource for shortwave listeners.

Receivers are now more affordable than ever and the hobby is enjoying a huge resurgence, in part due to the worldwide pandemic of 2020.

There is no time like the present to immerse yourself in the world of shortwave listening!

Looking for a fantastic shortwave radio? Tecsun Radios Australia stocks a range of Tecsun radios like the newly arrived Tecsun PL330 $145 right through to the latest Tecsun radio to be released and considered to be a masterpiece, the Tecsun PL990

Click here to view a list of major ABC AM radio stations by area. All frequencies are in kilohertz (kHz) and all are on the medium wave band (MW).

Shortwave radio listening is a hobby that allows you to fully immerse yourself in a separate world of international events. From listening to a shortwave broadcast station, long-distance aircraft travelling around the world or even international amateur radio operators, this hobby allows you instant access, to the exclusion of those physically around you.

To further enhance the listening experience, a good set of comfortable headphones is essential. Communications headphones, as distinct from those used for Hi Fi listening, need to be comfortable to wear for hours on end. At the same time, they need to be able to reproduce the full audio spectrum produced by the receiver, ensuring that even weak signals can be resolved adequately. Wired, over the ear headphones also have the advantage that there are no batteries to replace, contrary to Bluetooth and noise-cancelling headphones.

Another important requirement for a good pair of communications headphones is a long connection cable. Most Shortwave Listeners and amateur radio operators have their equipment set up on a bench or desk, which is often multifunctional. With adequate cable length (at least 2 metres), there is room to move around the “shack”, doing other things whilst maintaining a connection with the receiving source.

If you are going to invest in a good quality pair of headphones, it is important to be able to keep them in a safe place where they won’t get damaged and will be kept clean. A carry case is ideal for this, and this can also be used to keep any necessary audio adaptors (3.5-6.3mm adaptor to cater for all receiver types, for instance), and spare ear muffs with your headphones.

Here at Tecsun Radios Australia, we have held off selling headphones until we tested several on the market first to find the most suitable high quality headphones for shortwave listening.

Launching on Friday January 29 2021 we are proud to showcase the exceptional Tecsun Radios Australia communications headphones that have been specially selected with user comfort in mind. This is essential for long periods of shortwave listening. 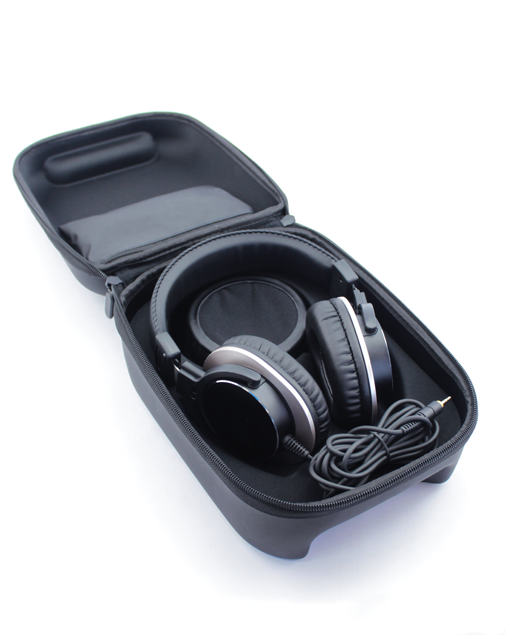 To read more about these communication headphones click here.

The thing about emergency kits is you don’t need them till you do.  As the name states, “Emergency”

Having a prepared Emergency Kit on hand, filled with items that will help you survive a bushfire or natural disaster, easily accessible and ready to go will not only give you peace of mind but may also save your or someone else’s life.

With just two weeks left till summer if you haven’t already prepared your emergency kit now is the time.

Pack your items in a watertight dry bag or sealable container and keep it in an easily accessible location in your house, accessible to everyone. Do not store it in a cupboard or wardrobe behind household items, you need to be able to grab this kit and go.

Have a family meeting and show them where it is located and what is inside it. It’s important that absolutely everybody, even kids need to know about this kit. Particularly if parents are injured or not close by.

Storing items within the kit in airtight plastic containers and sealer bags will help keep your belongings dry and in good condition both while in storage and during an emergency situation.

Repack expired items as needed and repack/ check your emergency kit every year. Set a note in your calendar every year to do this.

We recommend the Best Emergency Radio which is our highest performance AM/FM/SW Solar Powered Radio with inbuilt Solar Panel and Hand Crank Dynamo Charging. Additional features much needed during an emergency are an LED torch and personal alarm, a siren to gain the attention of emergency services and an inbuilt USB charger.

We recommend the DE13 Emergency AM/FM/SW Solar Radio which is an economy model, featuring a torch, personal alarm, inbuilt Solar Panel and Dynamo hand crank charger that allow you to recharge the internal battery or charge any device by USB or mini USB including your mobile phone. This is the perfect radio to keep for any emergencies

Click here to shop these products in our online store.