We were delighted to receive this fantastic  “Rig Review” from fellow radio enthusiast Alan McPhail. His story starts below!!

In 1951, as a four-year-old, I first became aware of amateur radio. My father had been transferred to Townsville by the Department of Civil Aviation and, while sitting in the rear of my parents 1934 Continental Beacon, I saw an HF quad antenna mounted on a tower.

My father explained to me that the antenna was at the home of a radio amateur and it allowed him to talk with people around Australia and the world by radio. This was the beginning of my interest in amateur radio. I have been licensed since 1978, but because of an interesting career, I did not become active on the bands until 2011 and then only occasionally.

After a lightning strike at home in 2015 along with the subsequent fire that burnt through the roof space, the house was severely damaged, contents written off and I lost most of my equipment.

The rebuild of the house took 13 months to complete and the subsequent time to resettle limited my amateur radio pursuits. Our home is on a corner block and the backyard garden is unsuitable for setting up a permanent antenna. I have experimented with dipoles but most often I used a home-built Buddistick antenna (www.buddipole.com).

When I was asked to review the G90 I was reticent to accept the task, not because of my extensive electrical and communications engineering background but because I did not have enough experience as an operator on the amateur bands. I note that in-depth reviews have been done by the RSGB, the ARRL, and on YouTube. The G90 has an active and supportive user group. It was suggested that I should share my user experience of the G90 for Amateur Radio readers. 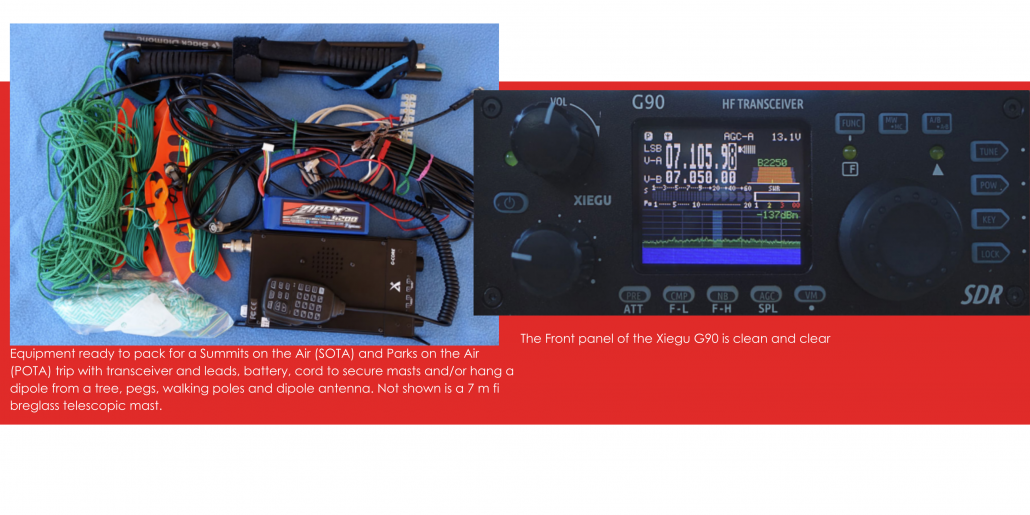 I needed to do some preparatory work to power the G90 and choose an antenna. I fitted Anderson Powerpole connectors to my 4200 mAh LiFePo4 battery and to the battery end of the G90 power cable. I connected the G90 to the battery and a short inside wire antenna. This was sufficient to check that the G90 was working on receive and to become familiar with the basic controls. Initially, I tuned to the ABC frequencies in the broadcast band and experimented with the filter control width and position. The operation manual was easy to follow, and others have improved versions available. Initial observations The colour display is approximately 4.5 cm (1.8”), but it displays a large amount of information very effectively, making the front panel appear larger than it is. On the air Every Friday between 09:00 and 10:00 hours, the Hornsby and District Amateur Radio Club (HADARC) conducts a 40 m net on 7.106 MHz. I thought this would be an ideal occasion to test the G90 on-air. I used a 10 metre length of coaxial cable to connect the transceiver to the antenna. My home-built Buddistick antenna was assembled and slid into the lower three sections of a 7 m-tall telescopic fiberglass mast, increasing the overall height of the antenna by 2.9 m. After installing the antenna counterpoise, I switched on the power to the G90 and tuned to a vacant frequency on 40 m, switched to the AM mode, and pressed the transmit key. The SWR was very high and I checked the antenna connections. Normally, I would adjust the counterpoise length to try to reduce the SWR. However, as I had read good reports about the auto tuner, I decided to activate it.

After a few clicks of changing relays, the SWR dropped to 1:1 and I tuned to the net frequency and joined the net. I spent an hour with the group whose reports on my signal were very encouraging. I could hear most of the participants and received “5 and 9” from several of the participants. Being able to join the group net so quickly on the fi rst setup is a demonstration of how easy the G90 is to operate. The 20 W power output also helped in successfully communicating with more participants than I have previously achieved with my 5 W transceiver. Being able to see the power supply voltage on the display was useful in monitoring my new battery. When switched off, the G90 saves the frequency and mode settings as the start-up values for the next time the rig is turned on. I joined the HADARC Net on a second occasion and I found the controls to be tactile and the panel layout convenient. The receiver audio was of good quality while the ±24 kHz bandwidth spectrum display and SWR scanner were very useful and easy-to-use features. A feature for the hearing impaired in CW mode is the yellow LED that indicates when a signal is being received if there is good reception. The controls There are four pushbutton switches on the top horizontal portion of the front panel, a pair to step up or down the bands, and a pair to cycle through the modes: LSB, USB, CW, CWR and AM. The three front-panel knobs are: • Volume control; a short press will toggle to and from the headphones; • Multi-function Adjustment default steps at 100 kHz and a short press enters the receive mode filter allowing adjustment of the bandwidth and position of the filter. The default operation of the knob can be changed with a long press to change other parameters;

The Xiegu G90 is a capable HF QRP transceiver that has easy-to-use – controls with an information-rich colour display. The 20 W output power, adjustable from 1 W, would be appealing to QRP and DX operators, particularly for SOTA and POTA. The standing wave scanner and automatic antenna tuner would also be useful in the field. Above all, I found the Xiegu G90 HF Transceiver was fun to operate.

Read the full article which includes additional tips, information, and even information about the Xiegu G90s portability, click here

The team here at Tecsun Radios Australia are serious about amateur radio and have found the G90 to be fantastic value for a receiver with this power and capabilities on the market.

Thank you the Wireless Institute of Australia for this information.

Get your G90 here 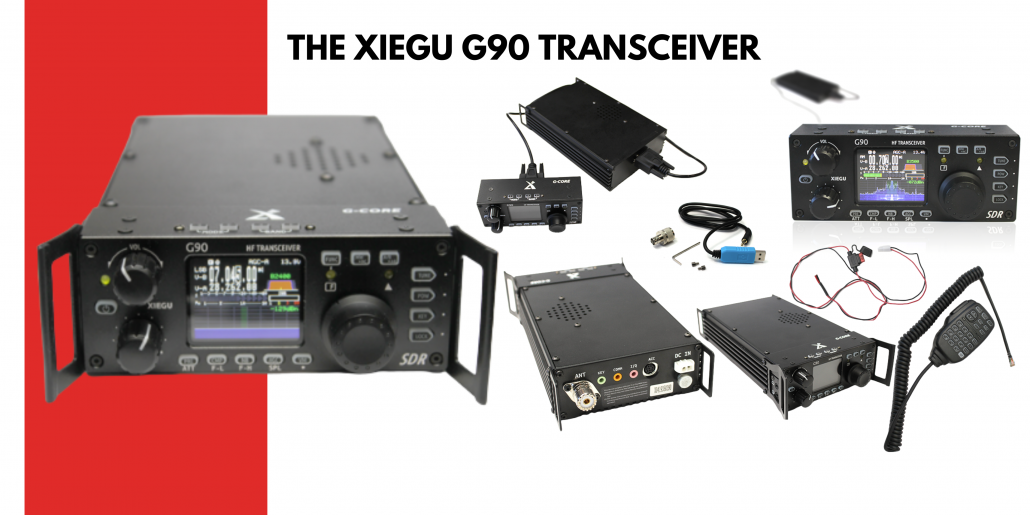 What is the contest?

Every year a contest is held that promotes HF contacts to and from amateur radio stations in the Oceana region as well as contacts between stations inside Oceania. Points are allocated for each contact depending upon the location. There is no penalty for working non-Oceania stations but contacts between non-Oceania stations will score no points or multiplier credits. Each contact or QSO is credited with twenty points on 160M; ten points on 80M; five points on 40M; one point on 20M; two points on 15M; and three points on 10M. Note that the same station may only be counted once on each band for contact points.

The aim is for Oceania entrants to contact as many stations as possible, anywhere in the world !! In 2020 over 1600 stations participated.

Oceania shortwave listeners should try to log as many stations as possible both inside and outside Oceania.

When is it on?

Enter one contest or both! See summarised notes provided by the contest holders.

SPECIAL NOTES FOR THE 2021 CONTEST

The Phone and CW contests are scored separately.

We all love to communicate, why not take a trip around the world with radio!! No internet connection or mobile phone signal is needed! Talk to other amateur radio operators across the world, maybe even in unusual places or as far as space!

Yes, that’s right, the international space station carries amateur radio equipment on board and there are always licensed amateurs among the crew who enjoy using it to communicate with operators all over the world. Youtube features several recordings of amateur radio operators communicating with space crew!

What to listen to

You can listen to local radio stations from around Australia, and even the world via shorwave.

HF aircraft channels, weather reports, and amateur radio nets. For those new to listening on the HF bands, nets are an ‘on-the-air’ gathering of amateur radio operators. chatting and passing messages, normally via organised radio nets, on a predetermined frequency at the same time every day.

These nets can range from discussions on areas of interest, to emergency messages or simply as a regular gathering of friends for conversation.

Here are some of the most common radio nets.

Imagine randomly tuning across amateur bands and being able to listen to another station you may not normally be able to hear, by simply tuning into a DX net.

Amateur radio clubs organise nets between members on a regular basis. The topics are often of special interest and can vary from vintage radio equipment, locating unique stations in Australia and around the world, using and discussing the AM mode of voice transmission and many more.

These nets foster communications members across geographic locations and special interest clubs, and make fascinating listening for shortwave enthusiasts, whilst providing an open communications link for those in isolation.

Traffic nets operate primarily to relay written messages. Both routine and emergency messages have been passed on behalf of others as a public service mission for decades.

Often used for training purposes or during emergencies such as natural disasters when there are power outages traffic nets are used to pass on crucial information to the affected areas. Often relayed by emergency services or ham radio users where possible.

*Info from the Wireless Institute of Australia