We recently became aware of a truly amazing story about the perseverance of shortwave listeners.

During World War II in Europe, many allied airmen were listed as Missing In Action. German shortwave broadcaster DJB, located in Berlin would regularly broadcast the names of airmen captured as Prisoners of War. This amazing story highlights the part that shortwave radio played in keeping hope alive for those distant relatives and the part that shortwave listeners played.

The story is told by the son of the lieutenant we are about to tell you about.

“On July 25, 1943  American Lieutenant, John Chapman Elliot who was tailgunner on a Royal Canadian Air Force Wellington bomber, took off from England to fly a mission over Nazi-held territory in Europe, this flight never returned to base and was named Missing In Action.”

Months later and after receiving no further news and fearing the worst, shortwave listeners in America began sending letters to Lt Chapman’s wife advising her that they had heard his name mentioned in a shortwave broadcast from Berlin.

“Before receiving this letter you will have had a telegram informing you that your husband, Lieutenant John Chapman Elliott, is missing as a result of air operations. I regret to have to confirm this distressing news.

John and the air crew took off on an operational sortie over enemy territory on the evening of the 25th July and we have heard nothing of them since. However, it is decidedly possible that they are prisoners of war or are among friends who are helping them to make their way back to this country . . .

Status unknown . . . “we have heard nothing of them since.” A place that leaves you in limbo without much room for hope.

During September a number of things happen.

Report received through the International Red Cross states your husband First Lieutenant John C Elliott is a prisoner of war of the German Government . . .

Notation in the scrapbook above the telegram (in my Mother’s hand) reads: 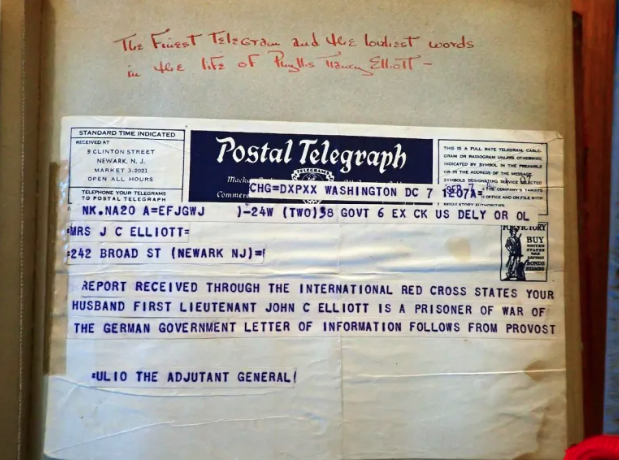 Around the same time, Mrs Elliot began to receive more letters and postcards with similar reports and kind words. These letters come from a cherished scrapbook.

Quite extraordinarily these postcards hailed from shortwave listeners from all over the country including Boston, Massachusetts ; Chicago, Illinois; Northville, Michigan; Green County, New York; Grand Rapids Michigan; Auburn, Maine; Burlington, Iowa, who had heard the Berlin broadcast that–  First Lieutenant John Elliott is a prisoner of war, and offering words of comfort or explanation:

Wishing you best of luck in his safe return to you, 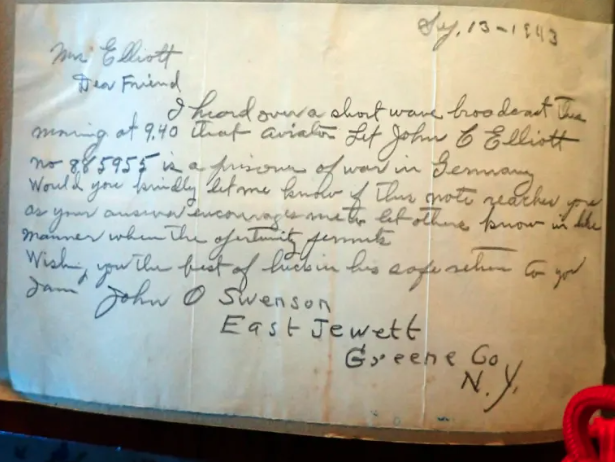 Hoping this may comfort you in knowing that he is alive and alright, 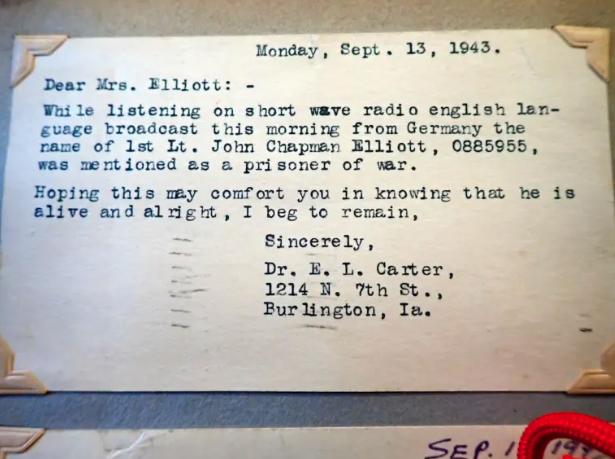 Hope this cheers you up.

Hope this will relieve your worries . . . 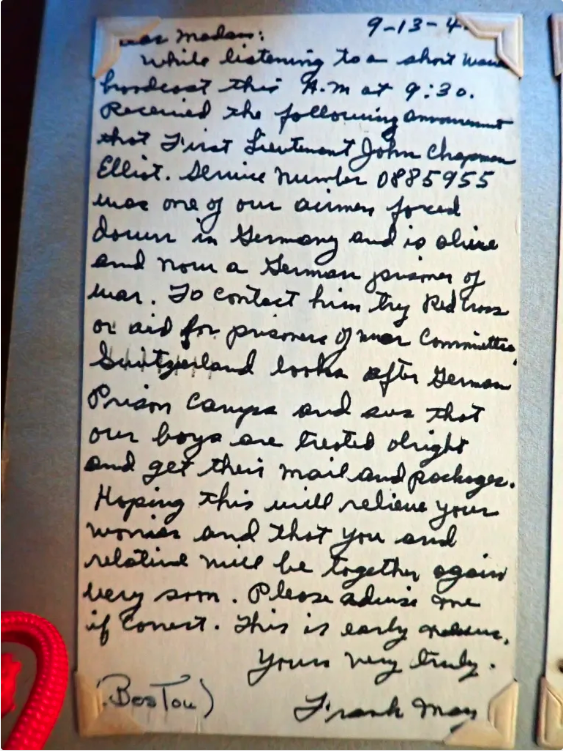 “My Dad later told me what happened. Their Wellington bomber was badly shot up, and the pilot informed the crew that it was time to bail out.

My Dad cranked his tail turret around so that the door opened into the air. He flipped backward out of the aircraft. For a little while, one of his electrically-heated flying boots caught on the door frame. Hanging upside-down, he kicked the boot off, pulled the ripcord on his parachute, and landed with green stick fractures in both legs. He hobbled around Holland for three days while trying to avoid the Germans. He was captured and spent two and one-half years as prisoner of war.”

When the war ended, he was repatriated, and in 1946, your humble correspondent showed up. The photos are of actual postcards and letters in an 80-year-old scrapbook kept by my Mother and passed down to me.

And so, dear reader, never belittle your hobby of listening to the airwaves, because you never know when something you heard may be able to offer comfort in times of trouble. I know it certainly did for my Mother.”

This is the most amazing and emotional story about the perseverance of those shortwave listeners in locating Lt Chapman’s family address and taking the trouble to write to his family, doing their bit to support the war effort.

Thank you to  Jock Elliott, KB2GOM for this incredible story published on swling.com