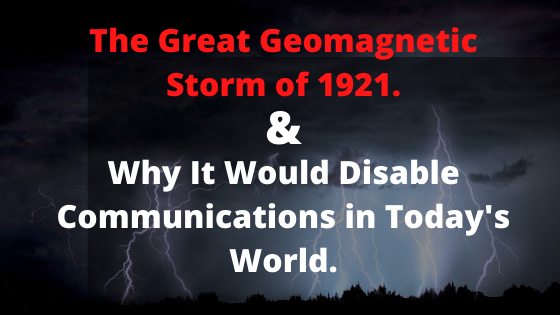 On the 99 year anniversary of what could be considered the most catastrophic geomagnetic event in human history, we should consider our vulnerability.

Geomagnetic storms are caused by immense activity on the surface of the Sun. Events such as Sunspots, solar flares and Coronal Mass Ejections of billions of tons of plasma into space at thousands of kilometers per hour can cause havoc with communications networks affecting our modern lives. In this age of satellite communications, where humans are more and more reliant on all forms of wireless communications, we are even more susceptible to damage from such events.

The worst example of this called the “Carrington Event” took place in September 1859 and is the most powerful geomagnetic storm on record. However an event called the “New York Railroad Storm” on May 16 1821 may well hold the record for the most damage caused. This storm began with a sunspot that was 105,000Km long and 34000 kilometers wide.

This event caused three major fires in the US, Canada, and Sweden. The fire in Brewster NY, was caused by strong induced currents in telegraph wires at a railway station which burned to the ground. The second fire destroyed a telephone exchange in Sweden and the third occurred in Ontario. Scientific observations at the time, including one taken at Watheroo WA, show reports of large earth currents flowing in telegraph and telephone systems, 15mA in South Australia, 50mA in Western Australia, and 200mA in Sweden. In New York and Chicago, these currents induced voltages of over 1000 volts.

Now almost 100 years since the 1921 event, we have developed a larger electrical and communications network which is even more susceptible to geomagnetic interference. If an event such as the “New York Railroad Storm” were to occur today, the damage would undoubtedly disable parts of the global power grid and consumer electronics at an unprecedented level.

Would you be prepared if power was lost during a storm? As we have seen during recent weather events communication is vital and having a backup plan is imperative.

Here at Tecsun Radios Australia, we stock some of the best emergency radios. Featuring solar powered and hand crank options ensuring that even if the power has been out for days or you are out of batteries you are still able to receive emergency announcements and coverage.

Video may have killed the radio star but shortwave is having a resurgence!!... Amateur Radio Nets, Providing An Open Communications Link For Those In Isol...
Scroll to top