Natural Disaster is often unpredictable, yet life threatening and devastating. Papua New Guinea (PNG), Tonga and Vanautu, have all experienced trauma through natural disasters this year. Papua New Guinea experienced a 7.5 magnitude earthquake and Tonga and Vanuatu enduring cyclones, Cyclone Gita and Hola respectively. It is crucial during times like these that there is effective, efficient communication that enables residents to gain both local and international news, informing all individuals of the most current and up to date situation. To prevent a delay in action following the natural disaster, ensure you are equipped with adequate forms of communication.

Shortwave Radio is an effective radio form that allows you to actively listen to world events from differing perspectives, where news items are normally broadcast in real time to provide all listeners with accurate information. Shortwave will allow you to stay informed during times like natural disaster, where power related infrastructure in inevitably destroyed and unable to be utilised. Whilst a large proportion of Short-wave Radio is broadcast using English as their primary language, few short-wave radios broadcast in a foreign language. By engaging with and diversifying the production of radio through a foreign language, a larger target market is developed, establishing a greater audience. 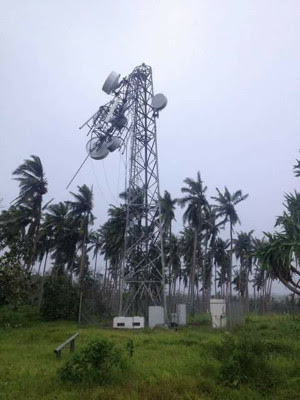 A mobile phone and communications tower located in Vanuatu, damaged by one of this years cyclones. Image by: dailypost.vu

Recently, funding by the ABC towards Shortwave Radio, was in contention as “The ABC ceased its domestic shortwave broadcasting services to the Northern Territory and international shortwave services to Papua New Guinea and the Pacific.” Although and whilst it can be argued that an ever-growing proportion of individuals in the Pacific and Rural Australia increasingly have access to the use of mobile devices, it is vital that in times of devastation, they have an effective, reliable and efficient form of communication. The breadth of reach that Shortwave Radio penetrated in the Northern Territory is enhanced where the “three transmission sites across the Territory, at Roe Creek (Alice Springs), Tennant Creek and Katherine, covered approximately 74% of the Northern Territory Population.” Discussion and Opposition towards the cessation of Shortwave Radio was promulgated by varying individual organisations, companies and politicians, where Nick Xenophon argues that the ABC is “ignoring the bush and Australia’s neighbours,” and that Shortwave Radio is a “form of soft diplomacy that is very effective, where it wins the hearts and minds in the region,” and without shortwave radio, Australians in remote communities are left isolated.

However, the recent funding cuts of Shortwave Radio, by DFAT and subsequently the ABC, have been combated by the establishment of Ozy Radio, which currently broadcasts on 4835 kHz. Tecsun Radios, supports Ozy Radio, where both Tecsun Radios and Ozy Radio are aware of the life changing impact that Shortwave Radio can have in informing individuals who may be isolated from the adequate infrastructure that can transmit much of the information heard by society today, whether this be for individuals living in remote areas, or for individuals to utilise during and after a natural disaster.

Following the earthquake that struck PNG on February 25, the director of PNG’s National Disaster Centre Martin Mose stated “communication networks were down and that was making it hard to assess the impact of the earthquake.” The anger penetrating from the residents of PNG stems primarily from the lack of information and adequate communication resources, which alongside the damage is ultimately “paralysing whole communities”. Had the ABC’s international Shortwave Radio services been active it could have provided a rapid and an effective method to broadcast information to communities impacted by the earthquake. The long distances that can be covered by Shortwave Radio lends itself perfectly to natural disasters, which are typically geographically concentrated. The rapid dissemination of information can inform communities where to meet emergency personnel who are trying to reach them to receive food, health care, and essential aim.