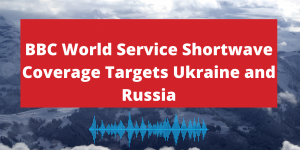 The BBC World Service will use shortwave radio to deliver trustworthy news to Russians, now that the Kremlin is blocking Western media websites’ reporting on Russia’s invasion of Ukraine. This was a propaganda tactic used in World War 2. The broadcaster stopped shortwave transmissions to Europe in 2008.

The broadcaster announced it is broadcasting four hours of English news daily on two shortwave frequencies, both of which “can be received clearly in Kyiv and parts of Russia,” said a BBC media release. The additional shortwave frequencies are on 15735 kHz operating from 1600 to 1800 UTC and on 5875 kHz from 2200 to 0000 UTC. 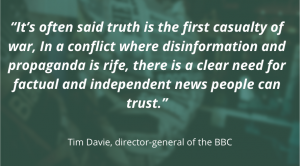 On March 1, two Russian projectiles struck the main radio and television tower in Kyiv, killing two people. Oleksii Reznikov, Ukraine’s defence minister, wrote on Twitter that Russia’s goal was “to break the resistance of the Ukrainian people and army,” starting with “a breakdown of connection” and “the spread of massive FAKE messages that the Ukrainian country leadership has agreed to give up.” 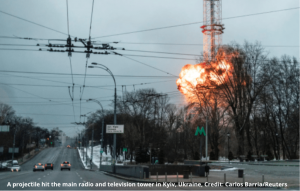 As it is widely believed that Russia dismantled its shortwave jamming transmitters in the 1990’s, these new broadcasts should easily be received, even inside Russia.

Over the last week of February, viewership of BBC’s online Ukrainian language site more than doubled from a year earlier to 3.9 million visitors, the broadcaster said Wednesday. The BBC also provides news coverage in the country via its website, YouTube, Facebook, Twitter, Telegram, Viber, and Espreso TV.

The BBC’s coverage has led to complaints from Russian officials. Maria Zakharova, a spokeswoman for Russia’s Foreign Ministry, said during a briefing broadcast by RT, the Kremlin-backed Russian media outlet, that Russia was the victim of “unprecedented information terrorism” that was “devoted to discrediting Russian actions” and “creating hysteria around Ukrainian events.” 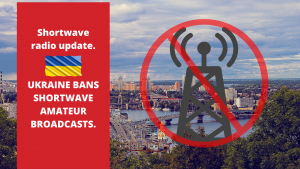 The world watches as the crisis in Ukraine unfolds. The Ukrainian government has imposed a state of emergency. This state of emergency allows the authorities to temporarily limit the public’s constitutional rights.

This includes a ban on producing and spreading information that may “destabilise the situation as well as a ban on amateur radio communications during the current conflict with Russia.

To supplement shortwave broadcasts to that country, shortwave broadcaster WRMI (USA based) initially resumed its relays of the daily English language broadcast of Radio Ukraine International, the official overseas service of Ukrainian Radio. (This information is most probably provided to WRMI from the Ukraine via secure internet). Subsequent to this, WRMI reverted to broadcasting in Ukranian.

Historically shortwave radio has been banned in Poland and Russia during times of conflict despite it being a critical source of emergency communication.

Our thoughts and prayers are with those currently in conflict.

This Annual event dedicated to radio was created by *UNESCO in 2011.

*UNESCO stands for The United Nations Educational, Scientific and Cultural Organisation which is a specialised agency of the United Nations aimed at promoting world peace and security through international cooperation in education, arts, sciences, and culture.

The first-ever world radio day commenced in 2011 on the anniversary of the founding of United Nations Radio.

This year 2022 theme is devoted “Radio and Trust”

Reporting of radio use around the world indicates that radio continues to be one of the most trusted and used media in the world. In more recent times, even during the most connected era, the isolating nature of word pandemics, natural disasters, and weather events, radio has continued to be a trusted source of communications,  not only to those in more isolated regions but also when power is out and connectivity is severed.

Radio is a powerful medium for celebrating humanity in all its diversity and constitutes a platform for democratic discourse. At the global level, radio remains the most widely consumed medium. This unique ability to reach out to the widest audience means radio can shape a society and serves as an arena for all voices to speak out, be represented, and heard.

Radio stations serve diverse communities, offering a wide variety of programs, viewpoints, and content, and reflect the diversity of audiences in their organizations and operations.